Seeing Novice Theory at the Rockwood Music Hall with a full band of supportive and talented musicians was an inspired way to close out a year and get ready for a new one. Whether solo or with a band, Novice Theory's music performance has electrical conductivity directly aimed to charge an audience. Mission accomplished!
Geo Wyeth has the ability to inspire listeners and fellow musicians. This was the first chance I got to see him with a assembled cast of exceptional musicians. What was so obvious was the genuine love they have for Geo and how much they enjoy bringing his music vision to fruition.
The fuller bodied sound of Jazz offshoots added to Geo's expanded lyrical palette beyond the autobiographical to include a tapestry of uniquely urban wit and insight. Last night they played work from the recently released EP Ordinary Death along with one freshly presented newer song. I like chances like that!
The sandwiched crowd at the small venue begged for an encore and we were treated to an older song played solo on accordion that was performed back in 08 on the Jools Holland Show in the UK.
It is wonderful to post this and to include The Music Slut's take as well. It is not often that I can share an experience with someone who enjoys music as music as I do and makes me feel comfortable in such close quarters. 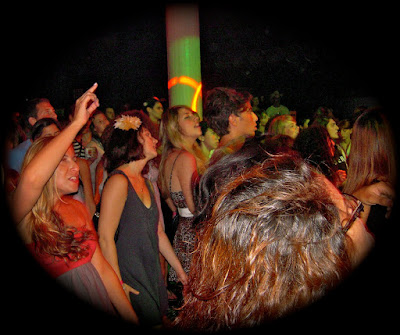 What an awesome journey it has been doing this site. Although I wish with all my heart that this could be my full time gig. I am still excited about the small part I am playing in moving the music culture forward one reader at a time. Sometimes it is the smaller blogs that can bring exposure to unknown music. Many of the people I've written about on these pages have moved beyond novelty and have gained more extensive exposure. That makes me happy. Obsession Collection Music welcomes another year doing this blog.

What am I looking forward to this year!
Langhorne Slim becoming a household name! 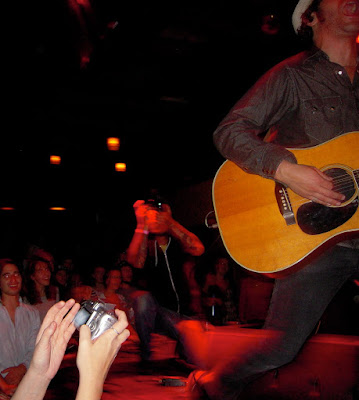 Drink Up Buttercup Countdown the upcoming full length LP Born and Thrown On A Hook to be released on Yep Rock Records!! Sgt. Dunbar and the Hobo Banned going back to SXSW!! Hop Along going to SXSW Looking forward to the release of Documentary of Viking Moses: Werewolves Across America by DARYL Pulse Films Wishing o'death the best for the new year! On the lookout for Honne Wells Performance artist extraordinaire! Can't get enough of Novice Theory! Continue to obsess over Max Vernon The Master Of Design Obsession Collection Music played a small part in coordintating an awesome holiday party back in September. This was a family affair with all attendees invited by my husband, two great adult children and me (OCM). The art and music crowd shared lots of love into the wee hours at Tre Merli.
I end the year once again saying how much I enjoy writing this blog and have been fortunate to have met wonderful people that have enriched my life and others.
OCM curated the music line-up. Below are some picture highlights from the party in line-up order. Party Flickr Set!!
Novice Theory
Brian Newman
Hop Along
Drink Up Butterecup
Posted by ARTIFACT at 12:44:00 AM No comments:

Always looking for nicely shot videos of Drink Up Buttercup and finally found one. Hear and see "Seasickness Pills" and stick around to hear James Harvey's operatic finale!