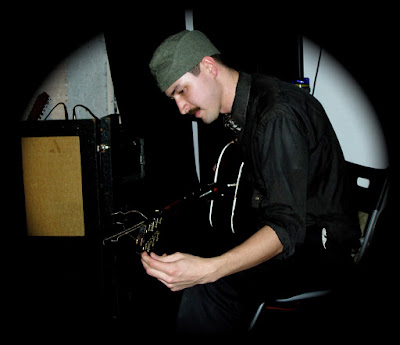 Wednesday night at The Stone Honne Wells stepped out of hiatus and onto the stage accompanied by musician/artist Juan Comas to bring Wells’ latest project to fruition. They played an array of string instruments tuned to specificity. The results were a dynamic assemblage of sound that was deceptive to the viewer’s eye but surprising to t 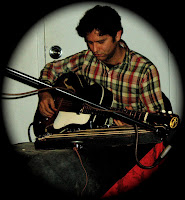 Put assumptions aside and the banjo, guitar and zither sounded like high and low pitched bell-like sounds of percussion. The zithers hummed and swelled in a loop like circular reverberation. The repetitive flutter plucking of the banjo had an unfamiliar quality, and the guitars played with glass slide and strum beat asymmetrical patterns of percussion. The kick drum was true to form.

This compelling mix was contrasted by the guttural low styling of Wells voice. His vocals are low and vibrate into depths of gospelesque blues of hard times and tough luck. The unexpected results of playing live tuned the audience into the process. We were welcome receptors.

All 4 songs clocked in at about 10 minutes or longer. The first was the combination of two zithers one fretted and one fretless, coordinating a long building dialogue between them. Honne repeated / don’t feel like I’m alone anymore / never feeling home in this world /.

Switching it up with two guitars they created a high-pitched bell-like clank and the kick drumbeat escalated to reflect Honne’s powerfull ramblings. Honne Wells striking physical presence his neck stretched, chin upward and stoic manner captured the conceptual attitude.
Honne introduced the next song “(Don't Follow Me Down To) The Bottoms” saying, “this song is written by Edgefield C. Johnston a good friend of mine”. Repeating a graveling intense verse / You Can’t Ride with Me /. With banjo in hand he plucked its strange tuning accompanied by Juan on the zither. 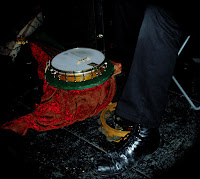 He thanked Shannon Fields for curating and The Stone “for supporting artist and culture in this fair city”. Then he said, “I’m going to sing a song about murder”. “If you live in America you have obviously murdered someone to some degree”. The song began and loudly he sang, “I have something that I must confess ess ess ess…. I just killed a man.

Sometimes it is necessary to leave the bar venue behind with its loud rude patrons there to socialize. The music takes a back seat. Just saw Honne Wells on Friday night Solo in just that situation and was determined to see him properly at The Stone. I’ve heard raves about this venue and now I know why.

Tonight it was music with benefits. The Stone provided the benefit hearing music with no distractions and gave to the audience with no other agenda but to listen. 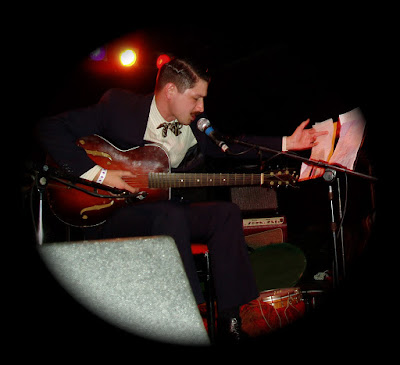 Solo Set at Southpaw
There are no refreshments or merchandise at The Stone. Only music. All ages are welcome. The Stone is booked purely on a curatorial basis. We do not accept demos of any kind. Each month a different musician is responsible for curating the programs with 100% of the nightly revenue going directly to the musicians. Now that’s refreshing! The stone is a project of hips road, a not-for-profit organization 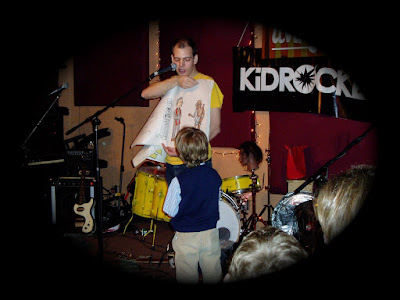 Kidrockers is a great way to spend a Sunday at The Living Room. My tiny kids days are long behind me but seeing Drink Up Buttercup and Jeffrey Lewis solo with a roomful of mostly three, four, five to nine year olds was something I was not going to miss.

Jeffrey Lewis and Drink Up Buttercup both have an affiliation with Rough Trade Records. Their shared sensibilities but uniquely different music genres created an inspired line up. Kidrockers is the perfect vehicle to expose the young to emerging and established music on the independent scene.

Seeing music live true to form without filters is a Kidrocker philosophy. Their Non-commercialized approach to present music raw and full of energy or simply acoustic is the groundwork for a lifetime of appreciation. The founders of Kidrockers Morton Lorge and Beth Lorge are fine hosts and curate fabulous afternoons of diversity in the music with Time Out Kids their sponsor partners.

Kidrockers don’t KID DOWN. So as an adult member of the audience much of the music and general banter is aimed at the adults without ever loosing site of the children's experience. The awesome MC team Seth Herzog and Craig Baldo took a few liberties with adult material. Their jokes were effortlessly delivered with, clever and quick responses. They said to the children “now watch your parents there is a two drink minimum today”. In the middle of each performance set they work the room with mic in hand for a Q and A, much like a contemporary version of Kids Say The Darnedest Things. Waiting for the unexpected question is part of the fun. It was especially interesting hearing the non-questions along with poignant ones. One boy raised his hand and recited abcdefg and Seth’s response was I think that’s a Feist song. 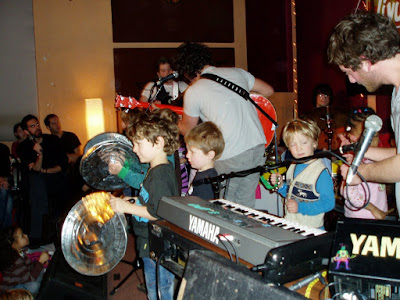 Drink Up Buttercup brings out the kid in me. I assumed they would play an acoustic set but I was so wrong! Not at Kidrockers! The sound was loud but not nearly at the intensity of a typical Drink Up show. They do protect the little ears. The carnival like atmosphere was toned down. They started with "Sozy and Dozy" a hard rocking zany children’s rhyme in a two-step rock polka. A treat was a great new song that repeated the word honey. 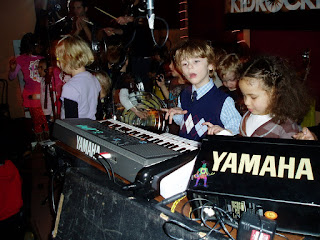 The kids politely took it all in not knowing exactly what to do but when asked to join the group on stage they eagerly marched up. The bombardment of little feet forged toward the stage, leaving only the timid behind. The Ramshackle miniature orchestra of percussionists accompanied Drink up for “Gods and Gentlemen".

Drink up thought for their next song the kids would follow them to the center of the venue for a stomp and clap sing-along. Watching the faces of the band turning toward their abandoned instruments to sing to their little comrades of music who stayed firmly on the stage was a riot. When the set was finally over our MC’s referred to it as the best trash can related Jam ever!

Seeing Jeffrey Lewis has been a goal of mine. I think that I chose the best possible venue to see him perform. Nothing was toned down he was totally himself yet his interaction and inspired off the cuff reaction to the kids was genuine and charming.

The songs he chose to sing were sophisticated nursery tales with broad visions of a better world. He delivers his inspired lyrics through an idealistic lens of hopefulness but with the ironic witticism of a seasoned adult. The music celebrates his commitment to social justice, global warming and a broad scope of issues using irony and humor. The banter was highbrow to the pleasure of adults and charmingly sweet with the kids.

He played a great song that he never performed live called “I’ve Been Everywhere”. He invited three enthusiastic audience members to hold the lyrics up and he described them as avant -garde teleprompters.

The questions for Jeffrey were great. “Have you been everywhere”? “When did you get your guitar”? “Do you write the songs yourself”? My favorite was, “how do you get your ideas”? His answers were sincere and thoughtful. I just loved him.

If you have your own kids I can’t think of a better way to spend a Sunday afternoon with them. If you don't, borrow a kid bring a nephew or niece then check the Kidrockers calendar or subscribe to their newsletter for scheduled events at a variety of venues. Their plans to take Kidrockers on the road are emerging. So LA get ready.
Gothamist interview with Beth Lorge

Posted by ARTIFACT at 9:46:00 PM No comments: Links to this post 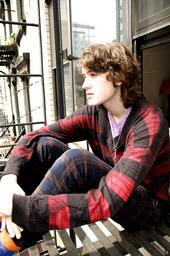 Max Vernon has a vocal instrument that is deep and resonating, its clear tonality has reach and depth of maturity. With a signature voice he delivers piano driven melodies with a broad lyrical palette of intelligence. At twenty years old he composes music that can move in many ways like the Woody Guthrie of Pop to make a bold comparison.

Max Vernon’s lyrics leave an indelible impression. Using dynamic melodies in a pop format he subliminally infiltrates the listener with smart content. His bait and hook got to me immediately. He employs words that move, words that drive the discussion, words that can be subtly subversive and delivered with a tongue and cheek attitude. Topically he is current but it is his intellectual curiosity that captures the subtleties and irony in the topics/controversies of the day. But wait! All this is delivered in the most beautiful manner.

He plays the piano with such ease and fluidity, melding Jazz, blues, Do Wop, cabaret and adds touches of frivolity with classical escapades that are diced into song construction.
Getting recognition from his delightful cover parody of Katy Perry's " I Kissed A Girl" is a strange way to find Max Vernon’s music. But it has been the vehicle for attention even though it was sort of a goof that he decided to record and make a video. Attention has come his way. As I am writing this a release party for The Guilt by Association Volume 2 featuring danceable cover songs is at t 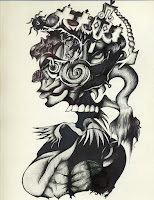 he Music Hall of Williamsburg. His cover is in good company.
Since he doesn’t have an official release he has chosen to share recordings and demos on a site called The One Sixty One. On You Tube he shares stripped down footage of piano and vocal in a variety of homey settings and the practice studios at NYU.

His most ambitious recording to date "A Good God Is Hard To Find." He infuses white collar crime, in god we trust, and proposition eight all into the same conversation tying these thoughts into a round of ecstasy embedded harmonies. How is that possible? But he does it.

Along similar lines is “Dear Democracy”. The heavy piano bass chords set the tone while he spews an operatic diatribe of political criticism ending each unnerving injustice with light sardonic classical notes, singing / I already know that I’m going to hell / so I’m having a party / a party.

"When Your Body Breaks" is an orchestrated production with female vocal backup Caitlin Pasko AKA (Lacrymosa), cello, violin, church organ, and flute. Giving a boost of encouragement for the depressed whose memories are tainted with grey. / Oh you deserve better than that / and you’re gonna have it / your body’s breaking / you’re left with just your mind / you’re gonna be fine / but it’ll take time….It will take time…

The Song "Pastels" is like poetic cinematic score. Singing about two people trying to find meaning in these troubled times / don’t criticize us /. It really pulls the heartstrings in the chorus / but I’ll be with you / you know / and when you fall down / just hit the ground running / and I’ll be running with you / running with you. He concludes interchanging running with you with take me with you. Ahhh...... I'm such a romantic sap.
In September 08 he was about to headline Ars Nova Uncharted Series. He wrote to me saying he found my Blog through some degree of separation after looking up the history of the series he found both Novice Theory and Langhorne Slim which lead him to me indirectly. I am so glad he reached out to me so I could discover his music and fall in love with it.

He closed his letter to me with "If you get a chance please give my songs a listen. Hopefully you'll dig it." Dig I did!

For now he continues his studies at NYU Gallatin School of Individualized Study graduating in May. The future looks bright and I look forward to it all.