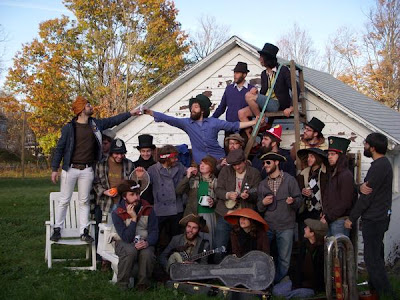 ger Series
B3nson Recording Company is a collective doing it independently. They remind me of the early years of Saddle Creek Records. Omaha & Albany have some similarities. And like the newer model Wham City that has taken shape in Baltimore.

The B3nson collective of musicians’ artists and writers are friends with benefits. They benefit by living, working and performing in Albany? Rather then moving to Brooklyn they are staying put with a plan. Sgt. Dunbar and the Hobo Banned the largest outfit in the collective book shows in the tri-state area about twice a month and play in Albany and upstate locations regularly. Many bands pass through Albany and Dunbar have opened for Rock Plaza Central, Deer Tick, and Avett Brothers. Staying put does have some benefits.

They work as a collective recording, booking, video production web design, flyer's, and hand made merchandise. Their creative skills compliment an aesthetic approach that is consistent with their ideals.

Their music and artistic directions have a thrifty aesthetic that represents a lifestyle of choice and necessity. Living cheaply and creatively from the outset makes choices about gas for touring, housing, instruments, food and clothing a given. Sometimes the most interesting things to look at and hear are authentically represented and not commercially misrepresented.

In tough times people who stick together help each other grow. The crews all have big hearts and are able to share a big tent. Their open spirit is represented candidly on the B3nson Blog where members contribute articles about other musicians they meet along the way. It is cool to read about music from a musician’s perspective.

Take talent, commitment, focus, and the ability to say why not. This is a collective well on their way to contributing to the music culture while creating their own viable movement.

Interview with Alex Muro of Sgt. Dunbar and the Hobo Banned conducted via email, in which he previewed a rough synopsis and answered the following curiosities.

OCM What is the up side of forming and being a part of a collective?

AM I think the biggest upside is having so many great friends. Our house lately has become somewhat of a collective hang out with the recent increase in B3nson activities and its simply fun to have people around all the time, hanging out, playing music, making things and playing Tetris. It's a great environment to conduct any sort of artistic activities. Beyond that there is the great advantage of talent and equipment sharing. We are lucky to have some really talented people in the collective who are good at all sorts of things from graphic design to recording and mastering to video editing, painting and all sorts of other stuff. The fact that we all enjoy hanging out together makes using those talents feel less like work and has allowed us to accomplish a great deal over the last month or so.

OCM Were there any concerns?

AM I don't think there were any general concerns about collectivizing as far as I know. We recently sort of "officially" added a bunch of new bands to the collective like Beware! The Other Head of Science, Swamp Baby and the Scientific Maps but there was already all sorts of membership blurriness and good friendships going on that made the transition seem kind of obvious.

OCM There seems to be a similar music sensibility between all the bands is forging a singular band identity a problem?

AM There definitely is despite the fact that some our music sounds quite different with bands ranging in styles from laid back soundscapes to folk to synth-spazz rock and lots of other stuff going on. I think the similarity comes from the fact that most of us have similar-ish backgrounds and have been in bands for a long time and listen to some of the same music. In general I'm not really sure how come the B3nson aesthetic works as well as I think it does, but its pretty cool. I think people are really going to enjoy the B3nson Family Funsgiving Compilation for that very reason, it fits together like an album way better than it’s supposed to.

OCM Are there plans for a large group tour like booking all the bands or some on one bill outside of the Albany area? Is that feasible?

AM There currently are not. I think that would be awesome and there is no group of people who I would rather spend an extended stay on the road with. Wham City has been doing something like that with Round Robin tour where they set up all the bands you listen around a big room each band plays a song and they go around in a circle the whole night. I think B3nson is still in much earlier stages than Wham City in that regard, we don't have any bands with national recognition like Dan Deacon or Beach House that can bring out the people to the shows that are needed to sustain so many musicians on the road. Give us a couple years though and we would really love to do something like that.

OCM What does being in Albany offer the bands?

AM The real answer is nothing, there is nothing in Albany that there isn't in any other city of similar size, we just sort of ended up here and the reason we are staying now is because we have made it a fun place to be. We are hoping that eventually b3nson and other currently growing facets of the Albany music scene make Albany a destination for new musicians but I definitely feel there is work to do before it really becomes attractive as a "music scene".

OCM Do you have other ambitions for the future?

AM I know that the members of Sgt Dunbar all want to be professional musicians and we would love to be able to quit our day jobs. We are working on a new album for release next years, working with some friends of ours to help promote it and planning our route to SXSW in for March. B3nson Records will also be releasing the debut record from Barons in the Attic in January and following with an album from Pinguinos hopefully shortly afterwards. For now though our ambitions are mostly concentrated on putting on a killer release show tonight for our 10th release the B3nson Family Funsgiving Compilation.

OCM Does working together build moral and help with a positive outlook for the future?

AM Working together sure is fun. I personally am not so concentrated on the future beyond March 09. It just seems like we have so much stuff to do between now and then. Working together on our current projects though definitely makes for a more positive outlook because the stresses and concerns are shared among such a large group of people.

OCM Were you asked to be a part of SXSW or are you going renegade and hitting the streets?

AM We got invited To SXSW by way of some good luck. I was doing my daily blog reading during CMJ and there was post on Idolater about unknown bands at CMJ and I commented about my feelings on the subject. It must have been a good comment because someone from SXSW saw it and invited us to the festival. We are really psyched to know so early that we've been accepted it would have been much more difficult decision to make if we had found out on Feb 1. It allows us enough time to plan a really good tour. We will certainly be hitting the streets like renegades once we get there though.
Pocket Concert Series featuring bands in the B3nson Collective.
Sgt. Dunbar and The Hobo Banned “The Weight”, filmed in an open field.
Swamp Baby “Lavender” Nick Matulis is joined by Jen O'Connor, Donna Baird, and Frances Quinlan (Hop Along, Queen Ansleis)
B3nson is:
Barons In the Attic
Beware! The Other Head of Science
Blood
Desperately Obvious
Pingüinos
Littlefoot
Scientific Maps
Sgt Dunbar & the Hobo Banned
Stacey Gets Drunk
Swamp Baby
The Hoborchestra
We are Jeneric
Posted by ARTIFACT at 9:31:00 PM