I only had one day. I played hooky from my full-time for some Blogger presented CMJ. My day started with Earfarm’s Matt and Mike (my inspiration) at Piano’s and ended at After the Jump Fest at The Knitting Factory. The Music Slut’s Matt and Jennifer we’re one of the many Blogger coordinators for this event, they are sweet and dedicated to music. Photographer Maryanne Ventrice was awesome to hang with.
Drink up Buttercup 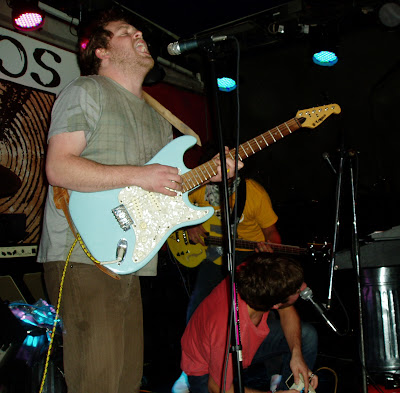 Being the first New York Blogger to write about Drink Up Buttercup back in May of 07 and many times since has been a joy. It never ceases to amaze me the power and exuberance this band projects. Drink Up Buttercup is the zany jolting sound of crashing garbage cans, infiltrated with out of kilter skating rink organ, muffled guitar, brutal bass, pounding polka drums, and killer dead-on harmonies. Their sound of infectious delight drew instant smiles from the crowd of new listeners at Piano’s.

Their short set consisted of many favorites but the evolved version of “Farewell Captain” is a succinct intense punk like rockabilly infused with madcap circus like keyboard. When it slows down James Harvey’s operatic vocals astonish. 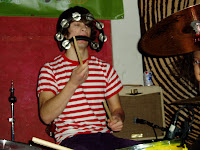 ts are a given at any Drink Up show. Watching Ben Money banging a small red metal garbage can and abandoning it in mid air as he seamlessly switched to bass and continued to move around the stage in exhausting. Listening to Frazad Houshiarnejad sing perfect harmonies while banging a giant metal trashcan with a maraca is admirable. Mike Cammarata will do anything for percussion including positioning a tambourine between his teeth. An unintended mishap was James Harvey had to trade in his muffled acoustic for a baby blue electric. It was pretty! The set ended off stage with an acoustic stomp along of “The Lovers Play Dead”.

What do they possess that other bands don’t? As audacious as their shows are the band members are unassuming and unpretentious. They are happy to perform and welcoming. That enthusiasm translates. Drink Up Buttercup is a conglomeration of everything that is right with music. 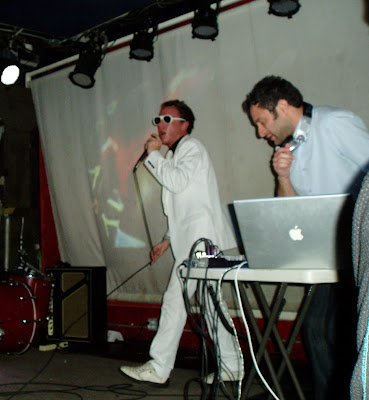 Project Jenny Project Jan was a treat to behold. Jeremy Haines (vocalist) is joined on stage with Sammy Rubin (programmer/keyboardist). Rubin’s feverish dance grooves are combined with the extraordinary mock speed rap of Haines. In front of a backdrop of video graphic editing, Jeremy includes every cliché dance move a geek dressed in a white suit and black tie could conjure. Much like a Saturday Night Live skit except this is not a joke, the talent is undeniable. Sammy behind the digital set up would smile and occasionally do an arm wave creating a comedic contrast to Jeremy's intense kinetic performance . It was a rip and a roar of an art performance, full of sweat and energy. Hysterically, Karaoke gone Real. I loved them! 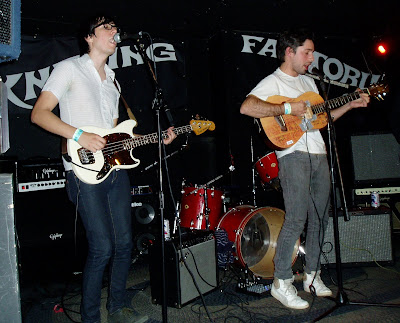 The Old Office of the Knitting Factory was the appropriate setting to hear the beat up sound of The Beets. The trio Juan Wauters (guitar), Jose Garcia (bass) and Jacob Warstler (two kick drums) all share vocals. They sound like a muted garage band with speakers at full throttle. Their vocal harmonies are barely audible, but create an intentional direction of distinction. Something about it sounded like sloppy fun pop with a low-fi twist. Kind of like, The Monkees through a liquidizer. The Beets sound aesthetic has endearing qualities. Also they had the best metal merch lunch box for their CD’s and tapes. 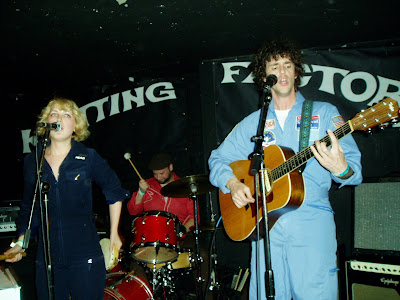 My evening ended with The Lisps. The foursome creates quirky cabaret folk-art-rock whose vaudevillian staging, augment their stellar sound. They combine great vocal arrangements with off center instrumentation. The guitar, bass and drums are combined with snippets of melodica and spiced with eccentric percussion accents like the banging a soft mallet on a metal cabinet or hammer on a drum kit. The vocal synergy of the two main vocalists has a dynamic juxtaposition of pitch and style. Cesar Alvarez and Sammy Tunis sing/talk wordy patter in sync with precision and ease.
Center stage is the lovely star lit Sammy. Her voice has Broadway like clarity peppered with avant-garde finesse and a twangy bent. A little like Jenny Lewis meets cabaret. Cesar her vocal counterpart voice is awesomely low in contrast. They present topical and contemporary savvy lyrics as editorial black comedy.

The vaudevillian panache is highlighted with low-fi costume changes. Cesar and Jeremy Hoevanaar ( 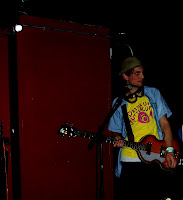 bass) switched glasses and goggles between songs. They had a costume theme of sorts. Caesar wore a NASA suit and Sammy a oncy (pants suit). A funny moment took place when the Jeremy announced he was making a costume change advertisement. He slowly unbuttoned his shirt to reveal Drink Up Buttercup’s new brightly colored Tee shirt.

The drummer Eric Farber was certainly part of the comic flair. I loved when he bounced on his cushiony drum seat flying up in the air looking like an oversized baby in a bouncy seat. His facial expressions were priceless throughout the set. He also weighed in on song selection illuminating that this group is a collaborative effort.

The Old Office never sounded better! The Lisps music won me over but their personal approach just killed me. It was so inclusive. If they were a club I’d sign up immediately. By the evenings end my smile o-meter had risen off the charts.
Maryanne Ventrice Drink Up Buttercup Video / early date

The Blending of music, art and now politics. Enjoy this "Quick Biography of Barack Obama by Jeffrey Lewis. Thank You Mr. Lewis for lending your art and music to this effort. Please Vote Everyone!

This is just too good not to share! Another Crackerfarm entry.
MySpace
Posted by ARTIFACT at 12:26:00 AM 3 comments: 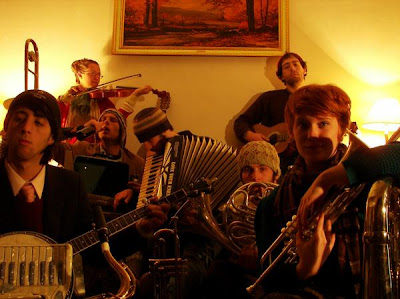 Sgt. Dunbar and the Hobo Banned 2007 self-released The Thing About Time is a passionate collection of brass centric gypsy folk rock featuring a community of spirited voices and an array of instruments that sound like weathered antiques given new life.

The songs fluctuate between intentionally sloppy melding of instruments and cohesive mixing, two distinct but agreeable directions. The large band sound is reminiscent of Bright Eyes touring band during Lifted. It has that kind of charming 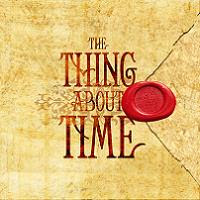 mess and endearing qualities. It also reveals the admiration of The Neutral Milk Hotel.

Sgt Dunbar and the Hobo Banned is a lyrically smart outfit. The word Banned is cleverly chosen to highlight their culturally rebellious point of view. They weigh in on philosophical issues of life and time. Refreshingly nuanced is the term Wake Up that is repeated on several songs, affirming a commitment to staying awake and being aware.

The first offering“Passing Time” starts with a rumbling of guitar strumming, accordion, horns and Alex Muro’s nasal fervent vocals that plea wake up. / I hear the sound months make when they disappear / gone into air and only clues remain / that they were ever here / leaf floats freely down and turns into ground /. The full force of the orchestra is revved up as Wake Up, Wake Up is emphasized and harnessed between verses leading to an awesome prolonged lullaby chant “Dave’s Song” in the vein of “Hey Jude”. / Wake up / wake up / you can’t sleep all day / you can’t sleep all day/ the sun is out calling your name / the sun is out calling your name /.

“Don’t Fall Asleep” is an appeal to those that have given up hope. / Dear little girl / I feel that your sadness is quite profound / chasing you around your mind / no place to hide / is dragging you down /. This song builds in volume and intensity employing the singing saw to weep and the full chorus to implore / please don’t fall asleep / when you wake the world is a dream /.

The song “The Weight” has a plucky bounce using the ukulele, guitar strum and singing saw to launch a weighty message / some peoples shame could fill up the ocean, some peoples sadness can block all the sky/ some peoples guilt could pave every highway and some peoples fears makes many men die…then the reaffirming chorus / oh how heavy this gritty grating life / that the world is on / oh how silly is all you strain and strife / build a world so real and strong.

“Realism Is The Purest Form of Art” features banjo, lazy horns and clashing symbols with pitter-patter beat. While "Telescope" is slower and examines how far you need to look away when love is untrue. / Do you believe in karma / does she believe in you / but what if I told you / that she wasn’t true? / Oh what would you do? / Both songs exhibit Muro’s vocal range that strains higher to reach sighs of emotion.

The under-belly of the beast is urgently felt in the stalwart rants on “Communist Father” with vocal force and added experimental accents that mimic the uncertain future. / Under the brightly blemished blanket of the night / an arrogant anthill with life / while weeping cities shed tears of light / into the unknown vastness of the universe /

Sgt. Dumbo and the Hobo Banned recorded The Thing About Time in the living room and basement. This homegrown undertaking amplifies the community spirit they embrace and has enabled them to create ambitious and worthy music! No secret, I fucking love this group. My first impression back in May of 07 has not wavered. They are young, fresh, talented and eager to venture into all creative realms. What I like is they are true to themselves with a creative vision for their future. The unbridled energy they bring to the stage extends to other projects. They are in charge!

I’ve been following two of their member’s videos and side projects. I’m totally hooked on Farzad’s (Captain Dum Dum) campy pop video called “Fever". Mike Cammarata, Drinkup’s youngest member is quite the thespian. His side project Yemen is a team effort partnered with Yoski Arocki is crazy as it gets. "Broccoli" Video.
Go to Drink Up Buttercup's MySpace site to hear the brand new “Young Ladies” track off LP recorded at American Diamond Recording.
Posted by ARTIFACT at 8:41:00 PM No comments: