Wham City Site De Jour
Wham City is an Internet site entity, that encompasses the OCD vision of an ingenious collective of musicians/bands, artists, writers, animators, filmmakers, comic artists, actors and fashion stylists. A Drum Roll Please! They can’t be stopped! Their trademark of inventiveness is extreme. Dan Deacon is their breakout music artist who is gaining national attention and press for his frenetic live shows. The magnetic force of his talent will draw people to the Wham City Website. Their projects are in full gear despite the loss of their physical headquarters in “Charm City” Baltimore, Maryland the city of choice for low rent and large space.

The Wham City site menu displays uploaded projects, events, touring, creative videos, alternative TV shows, comic sites and fashion sites that are updated regularly. Their uninhibited application of technology is a highlight, creating a site destination that is one of a kind.

The collective imprint is their kitsch aesthetic that creates a maze of visual and auditory entries. They Scramble images and sound melding the juxtaposition of; the new with old, found with consumed, high art with low, craft art with machine made, trash with treasure, and commercial with lo-fi. 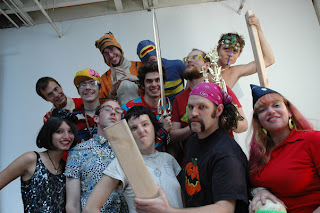 Through the scrambled web the collective merge their obsessions of pop culture, consumer culture, treasured eras, comic book heroes, and video gaming into unique visual and musical affectations. They celebrate these obsessions and parody them with abandon. One of the great delights is the melding of the individual vision with the collective.

Living Large Resourcefully
The Wham City collective is comprised of it's original founding members all (graduates of Purchase College), their friends and talented Baltimore contributors who share a similar sensibility, vision, and lifestyle. They are all living large without being weighed down by the materialistic standards that drive others. They understand the inventiveness of living creatively on a low budget and that has guided their creative freedom.

To Highlight a Few of The Heavy Hitters

Dan Deacon
Dan Deacon is an absurd music composer. His music is created with a keyboard and mic, that is plugged into a collection of discarded electronic equipment. He cranks up the decibels and alters his vocal frequencies, speeding it up with whimsical nuance, and child like wonder. Creating a chaotic beat that is infectious to audiences all over the country. He combines theatrics and audience participation into a lively frenzied performance happening.

Jimmy Roche is a Baltimore based Filmmaker, Video Artist
Jimmy Joe Roche created Dan Deacon’s latest video release "Crystal Cat" from the CD entitled Spiderman Of The Rings. Clocking in fast, the psychedelic kaleidoscope zooms in and out of Dan Deacon singing and convulsively moving his body. Through the lens are floating animation, puppetry, and guest band appearances by the Video Hippos, and the Santa Dads.

Dina Kelberman: Web Designer for Wham City and so much more…..
Another founding member Dina Kelberman, is their web designer and the creator of two spectacular links on Wham City. Her comic book site called Important Comics, displays her small shape abstractions that communicate within the bubble, saying things like; I’m bored, I’m a loser, this sucks and you’re a dick. It is dry humor based a little on self-deprecation and is hilarious in the context of slacker culture. Somehow she manages to sprinkle sweetness into the dialogue, with an obscure moral to portray. It is simple, but smart.

Poor Choice Clothing features Dina’s clothing concepts. The paradoxical name magnifies her unique and insanely funny humor. The fashions are must see. Dina’s detailed illustrations can be seen on the cover art of Wham City bands like the Santa Dads and flyers for events, and shows. She also creates
three-dimensional assembles that are used for plays and video productions.

s guests ranging from bands like the Parenthetical Girls, locals; the Charm City Roller Girls or presents a film by Meredith More with music tracks by Dan Deacon. Every show features his very own house band of rotating players. Done badly on purpose, the show looks like a late night cable access TV show; only it is intended to be funny. Ed has his own unique personality quirks like his obsessive unhealthy love for David Bowie and has the comedic approach similar to the late Andy Kaufman.

Without a large budget and their philosophical bent in tact, they have forged an Internet territory like no other. Slacker nation anything but, their creative culture and vision have no boundaries.

Just another reason I hate mainstream media. The review at Spin.com of David Dondero's Simple Love, really pissed me off. Everyone is entitled to their opinion, but to say that the lyrics of the song "Rothko Chapel" are schmaltzy by today's standards and that lyrics like this might have worked well for dust-bowl folkies, is unfortunate. I wonder what this reviewer would say about the lyrics of John Lennon's classic "Imagine". The two songs reflect a similar sentiment. Considering the social and political climate today, listening to Folk that has something to say, is not a bad idea and necessary.

It bothers me that thoughtful words can be reduced to a rating or discounted by a catchword. I don't care about Spin .com reviews, they do not influence what I buy or listen to. What is discouraging is that young people who could benefit by listening to music that generates reflection, might be swayed by this review.

We are a society of vacant minds who are spoon-fed music, education, politics and religion. We are manipulated daily by our government and the media. The ramifications of the religious right have infiltrated into our lives and laws. Religion is used to justify atrocities, to divide people, and to encourage hate rather then understanding.

What is so wrong with listening to inspirational lyrics that pose questions and that leave listeners to reflect on their beliefs? New or old words are powerful. Words and ideas can effect change. Let’s give Folk a chance to matter.
Spread this song around.
Rothko Chapel MP3
The Rothko Chapel web site

Dinner With The Band

No Junk Food or Muzak At This Site

Dinner With The Band is a site destination that features great music and great food. The formula is simple. Invite a band to a spacious loft for dinner and ask them to help prepare culinary specialties with the guidance of a master chef. Sit down to eat, converse and drink adult beverages. When the band is satiated, they will do what they do best: play music. This is the recipe for an entertaining and musically informative show. The simple formula is full of surprises and made fresh with the arrival of each new band. Although this site is professionally produced it is not watered down for mass appeal. That can ruin anyone’s appetite for either food or music. ith credentials in both food and music. Sam Mason the shows host is a well-respected pastry chef, owner of Tailor Restaurant in Manhattan, and a music fan. The fun begins in his homey pad, when the band members take on the duties of ad hoc sous-chefs. Mason’s relaxed amiable personality and style fit right into the mix. Seeing his beautiful tattoo sleeves, one might think he is a band member, brushing a snare drum instead of basting soufflés.

The show has a boutique feel and is produced with high quality digital film and sound by the top-notch outfit Super!alright! Media. Karaoke type graphics appear on the screen, to highlight each ingredient of Mason’s creative recipes. The music performances are vividly filmed, giving the viewers a close and detailed look into every aspect of the playing dynamics. More interesting then just straightforward filming, the camera picks up communication between musicians with close up footage and fresh camera angles. No gimmicks necessary, just the music.

Matt and Kim: Newest Episode Entry
The latest episode is with the band Matt and Kim a catchy dance punk duo, featuring Kim playing drums and Matt on keyboards and vocals. They are well known in the DIY circuits and have been gainin g national attention for their lively energetic heartfelt sets. The striking film segments capture the duo’s obvious deep connection to each other. Their unbridled energy is so forceful and honest, that this intimate private session feels like a performance for a large crowd. Their infectious music and fun-loving spirit thrive on the screen.

Kitchen Conversations:
Matt and Kim help chef Mason prepare black olive cobbler and homemade almond ice cream. The pitting of the olives is comical as they try to negotiate the special tool. We find out little quirky details, like Matt has sensitive teeth, while we watch him try to politely hold back the pain the hot and cold dish has triggered. We learn that Kim started to play drums three years ago and get to witness how far she has progressed, only by touring and relentless practicing. My favorite anecdote is that they toured the country for three years with one self-released EP. That is DIY ethic in all its glory!

Life Affirming Combination
The winning formula of Dinner With The Band would have a different outcome in the hands of mainstream media. Think of the mass marketing of food and the mass marketing of music, you know that both appeal to the lowest common denominator. In contrast, at this site you are treated to a life affirming combination, where great food and great music is sustenance.

Drink Up Buttercup @ The Cake Shop 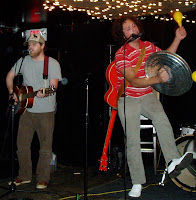 After seeing Drink Up Buttercup's set at the Cake Shop I am convinced of their broad appeal, talent and ability for getting people to take notice. This band needs no warm up time and being openers, they didn't have any.

Without a moment to waste they started with the song "Mr. Pie Eyes” that was delivered with gusto, playing garbage cans, big shakers and their vocals in full throttle. Especially enthralling is their ability to slow things down and instantly pick up the velocity. They are FUN to watch.

They combine theatrics. experimental instrumentation and rough percussion with added Beatle like harmonies. Yes, their harmonies and vocals are always on pitch and that good. They sound like Animal Collective goes pop.

It is great to see a young band with so much promise and enthusiasm, who are eager and ready to make somebody's day. They made mine.
Flicker Set

Posted by ARTIFACT at 9:00:00 AM No comments: Links to this post 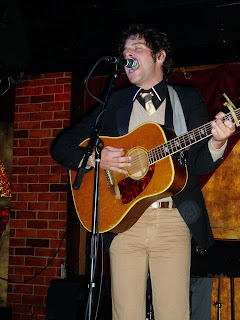 Live Review - August 31, 2007
Langhorne Slim and the War Eagles headlined at Club Europa playing what is referred to as a "proper" set on Friday night. They warmed the crowd at the packed venue then they stole their hearts. The love was palatable and the lively commotion delirious. Tearing it up with high energy hillbilly, rock, folk flare, and playing songs like, "Honey Pie”, “And It's True", “In The Midnight", and “Hello Sunshine”. In between the lively stomping numbers Langhorne played solo acoustic ballads, revealing his tender heart. 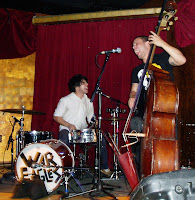 crowd to enthusiastically stomp, shake, and smile. The last three songs were a bonus and part of an impromptu encore, that he started with a request to turn on the disco lights, that hung like artifacts from another era. The mood was established and as the song progressed members of the audience joined him on stage. Ending the set with the crowd pleaser “I love to Dance”, that he said he should retire. The ravenous crowd were pleased he didn’t.

Langhorne Slims’ shows are always great, but headlining makes a difference. It is not too often that I see that kind of enthusiasm for music or have a night out that is so memorable.